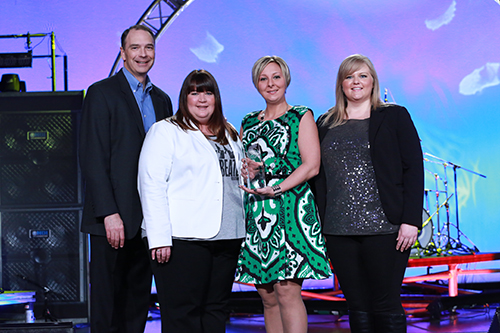 Please join us in congratulating Carrie Armstrong, Manager of Customer Support, for winning the 2014 HDI Local Chapter Officer of the Year Award!

The HDI Local Chapter Officer of the Year Award was created this year and honors a hard-working volunteer leader from the HDI local chapter community. Carrie has served as an officer for the HDI Steel City local chapter for over 5 years. She is currently the VP of Communications and has previously held the positions of President and VP of Programs and Vendor Relations. During her time as an officer, the local chapter has received the HDI Circle of Excellence Achievement Award with Presidents Circle Distinction every year. Additionally, the chapter was honored with the 2012 Local Chapter Rising Star Award.

HDI is the worldwide professional association and certification body for the technical support industry. Each year, HDI awards the highest honors to those that have most enhanced the image of the support industry by achieving and maintaining the highest standards of excellence in service and support. With over 485 officers across the 63 local chapters in the United States and Canada, the HDI Local Chapter Officer of the Year Award honors a hard-working volunteer leader from the HDI local chapter community.